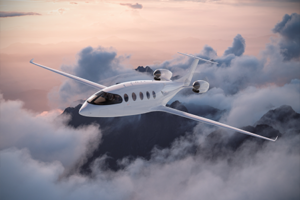 Exciting times lie ahead for global civil aviation, with flying expected to become climate-neutral by 2050. Alternative fuels are one way to achieve this goal – but their widespread use will take several years to come: Production is complex and expensive, and there are still too few manufacturers.

That is why the 27th of September 2022 could enter the history books: For the first time, the “Eviation Alice”, the first electric aircraft designed and built for commercial passenger operation, took off. Eviation Aircraft was originally founded in Israel in 2015 and later moved to the USA. The maiden flight of a first version of the zero-emission jet is designed to carry a payload of about 1,300 kg, equivalent to nine people including luggage.

The “Alice”, as the first e-jet was christened, is accelerated by two electric engines to a speed of around 480 km/h and reached an altitude of just over 1,000 m during the first, eight-minute test flight. Nevertheless, it will take until 2025 before all tests are completed and prototype production can begin. In the long term, Eviation Alice will be used primarily on short-haul routes between regional airports, with a cargo version of the e-aircraft also being considered. A possible new era of transporting passengers and goods coming into PRIMUS AERO’s scope perhaps sooner than we think!